Traveling Round Trip by Bus from Bangkok to Siem Reap

While in Bangkok, Thailand, in May 2016, I decided to take a solo trip by bus to Siem Reap, Cambodia, to visit the ancient temples of Angkor Wat. When I started researching the option of taking the bus, I noticed much of the info on the internet was either outdated, wasn’t complete, or wasn’t very clear on the entire process to complete the round trip. Below you’ll find what to expect, along with the steps I took, to make the journey without any issues.

Please Note: There are other options to get from Bangkok to Siem Reap (by a different bus company, although I’ve read horror stories about people booking buses on Khao San Road, so be careful; by train to Aranyaprathet for $48 Baht and then hiring tuktuks or minivan drivers or even catching the same bus I took from Bangkok; or, lastly, by air to Siem Reap), but the info below will only outline going by bus using the Transportation Co. Ltd (Thai name) and Nattakan (Cambodian name) Bus company. (Both companies are owned by Nattakan but use different names in each country, just an FYI.)

First Action: I booked my bus ticket a few days in advance using bookmebus.com.  However, you can go to the Mo Chit Bus Station, which is five minutes from the Mo Chit Train Station, and purchase a bus ticket—either in advance or even on the same day. (Mo Chit Bus and Mo Chit Train are different stations, so you want to make sure you’re going to the bus station and not the train station.) The price of the ticket each way through bookmebus.com was $28 USD plus a $1 credit card processing fee [$29 USD each way and $58 total]).

Departure Day: I had booked the 9 a.m. bus online two days prior (there is also an 8 a.m. departure) to Siem Reap, and I arrived at the station on departure day around 8:30 a.m. I wanted to be early in case I was running behind getting to the bus station. I approached the bus company window (see the photo below) to ask if my e-ticket was valid on my phone, or if I needed a printed copy, and the lady working said the e-ticket was fine. If you have a printer at your hostel or hotel, it might be good to print the ticket just in case, as most things seem to be decided on the fly by the counter worker or driver. However, I had no issues using an e-ticket, and I witnessed many others doing the same, so you can decide, obviously, what suits you best. 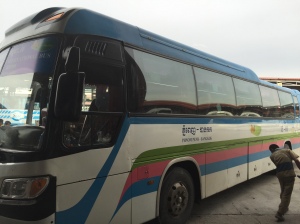 On the Bus: I boarded the bus approx. 15 minutes before 9 a.m. I chose my seat number prior on bookmebus.com, and that was the seat I ended up with. The bus was clean and relatively new, so that was a great thing. We departed Bangkok on time; we were given a muffin, a coffee, and a water bottle for breakfast, and we continued onward before arriving in the town of Aranyaprathet at approx.1 p.m.

Thai Border Arrival: In the Thai border town of Aranyaprathet, we stopped at the Nattakan bus station for 10 minutes (see photo below). The driver and co-driver exited the bus, and only one new person got on. As we waited and began to leave the station, the co-worker gave out lunches—a box of fried rice, crackers, and another water bottle. Over the next 15-20 minutes, we ate lunch while going down the road and soon arrived at the border; the helper stated to everyone on the bus that he could process our Visas for $1400 Baht, but don’t do this. It’s a way for the bus company to make more money, and it is cheaper for you to get off the bus and do it yourself, which the majority of the people on the bus will do. Plus, everyone has to exit the bus and go through the Cambodian Immigration in-person, so it’s a waste to pay the co-driver to process your visa when you will have to do the same process that everyone else does except pay the Cambodian officials yourself. You will still have to wait until your visa is processed and continue on down the road to get back on the bus in Poipet (the Cambodian border town on the other side of Aranyaprathet). 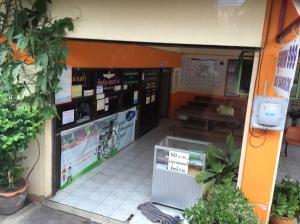 Things to be Aware of Crossing the Border: As soon as the bus stops to let you off at the Thai border in Aranyaprathet (within the Ronglua Market area), Thais will rush toward the bus—men, women, and children—all stating they can process your visa for $200 Baht and will attempt to accompany you with guided directions to the Thai Immigration and Customs (departure) Building. Decline all offers for help and don’t agree to pay anyone for their help. You don’t pay anything until you’re at the Cambodian Immigration and Customs (arrival) Office where you’ll see a sign on the wall stating $35 USD Visas (scam) and $30 USD Visas. The best directional advice to find the Thai Immigration Office is as soon as you get off the bus walk five to ten yards straight ahead of the bus and turn left down the road. You’ll see street vendors and the corridor you’ll walk down to reach the Thai Immigration Building. After you get your departure stamp and walk through the exit, turn right and head across the street to the Cambodian Immigration and Customs (arrival) Building (see photos below). 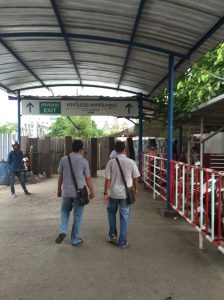 Cambodian Visa Processing: The Cambodia visa processing is pretty straight forward. You’ll fill out an immigration card and slip it along with $30 USD (crisp bills only) into your passport and hand it over to the custom officials. They’ll take you documents and give your passport back once it has been stamped. I noticed a few people were charged $35 USD, so my advice is to only stick $30USD into your passport and avoid asking the officials “how much” when you approach the counter. They are sure to request more if you ask first. In addition, if you’re asked for another $2-5 USD ($32-35 USD total) for the visa, you could try to argue it, but I’ve heard of people being strung along and their visa not being stamped for several hours. Hence, you could miss the bus over an extra $5 USD. It’s all a scam, really, so if you end up getting scammed out of an extra $5 USD, it’s better than being left there to eventually spend much or to get out of the situation.

Exiting the Cambodian Immigration and Customs Building: After your passport has been stamped by Cambodian officials, you will exit the Cambodian Immigration and Customs building and walk toward the casinos. The area in between Aranyaprathet and Poipet is full of people trying to sell you services. I saw a naked woman standing in the street, seemingly in a daze, and a few children tried to pull me toward several vendors. A few children even tried to put their hands in my pockets. Just be careful here. I never felt unsafe; I just needed to be aware. A few minutes later I found our bus parked on the right-hand side of the road and boarded. The entire visa arrival stamp process took around 2 hours for everyone to complete.

Poipet to Siem Reap: The bus ride from Poipet to Siem Reap was pretty straight forward. It took about 3 hours. In Siem Reap, we pulled into the Nattakan Bus Company. The owner of the company boarded before we were allowed to exit and announced tuktuk drivers were there to give us rides to our hotels or hostels (the charge being a “tip” only). I paid $2 USD for a ride to my hostel. In addition, I hired my tuktuk driver for the next two days to take me to Angkor Wat. And he picked me up at 7am sharp each morning. The charge for being driven around Angkor Wat for the day was $15 USD, and this didn’t include the tip. I did this for two days to explore the outer and inner complexes of Angkor Wat. Just be sure you’re getting the entire day and your driver is good at English (to get a thorough guided tour). If you don’t feel comfortable with your tuktuk driver, you can wait until you get to your hotel or hostel and ask the staff to hire you one for 15 USD or less.

Siem Reap to Bangkok: The return trip back to Bangkok was the same (but in reverse) process as the trip to Siem Reap. 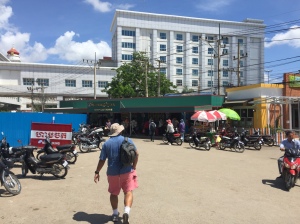 That’s it. A good plan to follow, on both of the bus trips, is to remember who else is on your bus. This will make things easier when you’re unsure where to go during the chaos at each border crossing. Stick with members of your group, and it will be easier for you to figure out the process and not get lost.

Conclusion: I’m glad that I chose to do the round trip bus trip using the Nattakan Bus Company. The border crossing and overall bus trip wasn’t as bad as the horror stories I read on the internet. I also never felt unsafe or that my life was in danger going through the border crossings. The bus is a cheaper than flying and was an experience I’ll never forget. Above all, Angkor Wat is an amazing place, and I’ll always be thankful that I had the chance to visit and explore the temples.

I hope this guide helps you. Good luck! 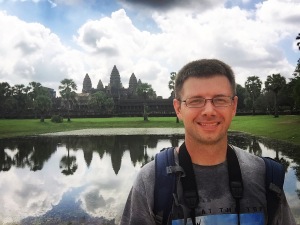 Me at Angkor Wat